Who Was Jackie Robinson? 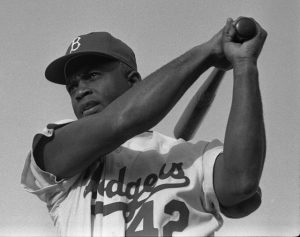 Jackie Robinson broke the baseball color barrier and became the very first African-American to play on a Major League sports team. He was the youngest of five children and was born on January 31, 1919. In 1945, he signed a contract to actually play for the Kansas City Monarchs. According to Kansas City lawyers and historians, He was paid around $400 per month to play shortstop for the team and he made the all-star team that year.

He eventually made his Major League debut on April 15, 1947, at Ebbets Field in Brooklyn, New York. It was on this day when he broke down the color line and became the very first African-American baseball player in the entire league’s history. That same year, he ended up winning Rookie of the Year by batting .297 and hitting 12 home runs.

He went on to have an incredible career and even won the National League batting title along with leading the league in stolen bases in 1949 that very same year. He went on to win the National Leagues Most Valuable Player (MVP) award in 1949. He then went on to play himself in a biopic based on his life which released in 1950. Throughout this entire career, he ended up playing in 6 different World Series but only ended up winning once against the Yankees in 1955. He retired from baseball at age 37 in 1956 due to experiencing negative effects from diabetes.

Along with becoming the first African American baseball player, he ended up becoming the very first African-American vice president of a major American Corporation when he became the vice president of personnel for Chock Full O’ Nuts coffee. To add to that, he even became the first African American TV sports analyst in 1965. Along with this, he ended up cofounding the Freedom National Bank which is a black owned and operated bank that started in Harlem.

He was seen as a major figure throughout the entire Civil Rights Movement. He ended up being elected to Baseball’s Hall of Fame during his first year of eligibility in 1962. He kept up with the trend of being the first African American inducted into the league’s Hall of Fame in Cooperstown.

Jackie Robinson was one of and remains the most historical African American figure in sports history as he truly broke down barriers and made a social impact beyond belief throughout his entire life.

Comments Off on Who Was Jackie Robinson?