What Were The Stonewall Riots? 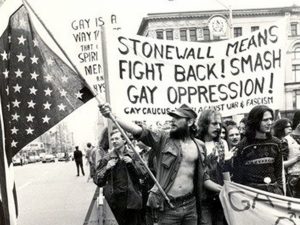 In the mid-1960’s and decades beforehand, the LGBT community was treated with scorn and extreme injustice, and it had grown so serious that acts even considered of a homosexual nature were deemed illegal in New York City. This included holding hands between same-sex partners, dancing with people of the same sex and, of course, sexual acts between same-sex partners. Due to the mistreatment of the community, members of the LGBT were forced to “operate” underground, flocking to safe havens where the gay community was welcome to mingle in secret. One of these establishments was the Stonewall Inn of Greenwich Village.

The Stonewall Inn was owned by the Genovese crime family and operated as a legitimate front in the form of a typical club. The club allegedly wasn’t even technically in need of a liquor license because it required its patrons to bring their own alcohol, and it managed to keep itself off the radar through bribery of the Sixth Precinct. This allowed the club to operate for patrons of gay and lesbian persuasions and even provided a sanctuary for drag queens which had typically been shunned from other establishments at the time. Beyond these benefits for the LGBT community, it also allowed the Genovese family to ignore typical building regulations such as running water for washing dishes and using toilets as well as neglecting to have any appropriate fire exit. One final benefit of bribery was that it typically gave the Stonewall Inn the security of advanced warning from corrupt cops whenever a raid was about to take place. So, taking precautions to hide alcohol and granting time to patrons so as to disguise themselves kept the Stonewall Inn in operating order for a relatively long time.

This was another concern beyond the general homophobia and “illegal” acts of same-sex partners. Even dressing to certain standards was considered illegal (one needed to wear at least three gender-appropriate pieces of clothing), one reason that drag queens were so typically received with tepid regard at best. It gave police a supposedly easier way of identifying members of the LGBT community even if they weren’t actively involved in otherwise illegal acts.

On June 28, 1969, all of this culminated in an unannounced and unaccounted raid on the Stonewall Inn by police, leading to the arrests of 13 individuals. Patrons actively resisted the efforts of the police to identify those who were cross-dressers, irked by the constant harassment that the LGBT community suffered from police. Some lesbians involved in the incident even alleged that police inappropriate touched them while searching their person.

The resistance drew a crowd outside of the establishment, and it appeared the sentiment was shared. As police continued to attempt arresting the individuals in the bar, they were met with onslaughts of thrown items, which in turn caused police to arrest members of the crowd as well as the patrons of the Stonewall Inn. The violence escalated and eventually involved the fire department and tactical forces to overtake Christopher Street, and while the rioting was calmed for that one night, the overall demonstration lasted for nearly a week with tensions rising between the LGBT community and the police force.

The Stonewall Riots, as they had been dubbed, eventually grew to give the gay community a sense of empowerment, and open displays of same-sex acts were more frequent in public during this stretch of time. While the fight for civil rights within the gay community had already been ongoing, the defiance spurred others to action and more gay coalitions sprang up in the following months, including the Gay Activists’ Alliance and a rejuvenated Gay Liberation Front.

Comments Off on What Were The Stonewall Riots?