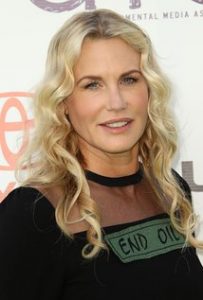 There are those who are willing to fight for environmental protections at great personal cost, and Daryl Hannah is one such individual. She is an actress who has been arrested on more than one occasion in order to prevent activities by those who may have a harmful impact on our world and its fragile ecosystems. She is best known as the character “Elle” (the deadly one-eyed nurse) from Kill Bill. Hannah’s exploration into ways to prevent man-made climate change is noteworthy for several contributions.

She records her own video blog “DHLoveLife” in order to help promote potential solutions for a better, more sustainable society moving away from the burning of fossil fuels. Viewers will recognize that she had her home built “green” and it is directly powered by solar energy, a solution which more and more people are getting on board with each year. On top of that, she is vegan and drives a vehicle that uses biodiesel.

Thankfully, solar advancement doubles every two years thanks to activism such as hers. Futurist Ray Kurzweil even predicts worldwide solar domination by 2028. Solar had just a half percent market share in 2012, one percent in 2014, and two percent in 2016. Do the math:

Although this seems impossible, the principle is found in almost every aspect of information technology (consider the very similar Moore’s Law, for example). Many of these technologies double about once every eighteen months. Many of Kurzweil’s “crazy” predictions have come true in the past.

Hannah has done her part by promoting several programs devoted to clean energy alternatives. She participated in the iMatter March in 2011 and the Ride For Renewables project, then executively produced the documentary Greedy Lying Bastards to showcase the corporate connection to climate change denial. She also wrote letters to former President Barack Obama to ask that he cut his support for the Keystone XL pipeline. She was eventually arrested for blocking construction equipment for that same pipeline, and then again in front of the White House for protesting its construction (notably with Robert F. Kennedy).

She continues to participate in the World Future Council, a Hamburg organization dedicated to push forward policy that benefits those who will grow up in future generations–especially when it comes to environmental protections.

Although most of Hannah’s contributions to activism are environmental in nature, she is also a key player in the fight against sex trafficking and sexual slavery that still occurs worldwide. She travels the globe in order to document this terrible atrocity. If there were more people that devoted themselves to such causes, we might be living in a totally different world.

Comments Off on Daryl Hannah’s Contribution to Environmental Activism