Celebrities Who Have Been Arrested For Protesting 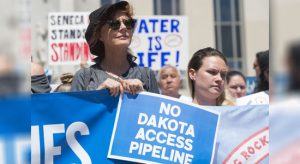 We should be thankful for the countless people who have fought protesting for our rights. Many of those people include a number of Hollywood social justice warriors (and of course they fight for a number of other causes as well). They have the money, power, and influence to do things that not all of us can, and many of them have been arrested for protesting in order to fight for many important causes. Here are a few of the celebrities who have been arrested for protesting.

The Dakota Access Pipeline is still fresh in our minds. Shailene Woodley was arrested while protesting its construction on the Standing Rock Sioux Tribe’s reservation. The tribe explained that the pipeline will destroy grounds sacred to it, while others worry over its threat to the water supply in the area. Woodley was arrested alongside many others, but was promptly released from the Morton County Jail in North Dakota.

Who doesn’t love George Clooney? He’s living proof that how old you are doesn’t make a difference to success. You can do whatever you like at whatever age you like if you take the time to try. A humanitarian situation developing in Sudan in 2012 led to his protest and arrest. He described the continued starving, raping, and killing of citizens by the Khartoum government. He was arrested at the Sudanese Embassy in Washington D.C. for his part in the protest, but his efforts did not go unnoticed.

When West African immigrant Amadou Diallo was shot and killed by New York police in 1999, Susan Sarandon and 219 others were arrested while protesting outside the NY police headquarters. This shooting is especially relevant today, as the Black Lives Matter organization continues to grow and inspire others to stand up to police who are routinely pardoned for the killing of African American citizens.

Woody Harrelson is known for many things, and perhaps one of the grandest is one of the, well, grandest. In 1996 he scaled the Golden Gate Bridge to prove a point: the redwoods are home to millennia-old ecosystems that are unique to themselves, and they should be protected at any cost. At the time, a 60,000 acre redwood forest in Northern California was in jeopardy. Harrelson and a number of other environmentalists were arrested after their protest was completed.

Lucy Lawless, best known for her stunning roles in the TV shows Xena and Spartacus and a number of movies, is also known for her continued participation in the fight to save the environment. This New Zealand native was arrested in February of 2012 after she and others protested the drilling of oil from a ship in the Arctic. She eventually pled guilty to burglary, and was sentenced to a $547 fine and 120 hours of community service. We’re sure she found it a small price to pay for fighting to save the world. Thank goodness they had a good criminal attorney.

Comments Off on Celebrities Who Have Been Arrested For Protesting